A Runaway Kitten, an Indian summer and Jesus had to be God!

And then panic bells tolled! The maid discovered that the #cuteasabuttons kitty had run away from a weird hole in the washroom.

All cats in heat, try to do this if there's romeos lurking outside, apparently.

Mich the Fish and her dad were still on their way back from a sleepover, husband was out of station, Dave the brave was called back halfway from church, maid and I started the whole search on foot.

2 hours later, kitten was found crouched, by Fish doing a search with her girl gaggle of tweens, in a hole in the rock, besieged by thorny bushes and hissing at us all. Half from the stress, and half from trauma I suppose.

Then began a whole drama of instructions by us, parents, tears from Fish (Mich), really brave manoeuvres and crawling and several near successes by Brave, joint attempts by maid and Brave, random stranger attempt, loads of pricks and all that scratchy jazz.

At one point when Brave wasn't pushing forward because the cat was hissing and swiping at him, I yelled at him to " just grab her tail and get her out and if you get scratched or bitten, I'll take you to the doctor, but this rescue needs to happen." Poor guy had a look of disbelief on his face for a split second. Disbelief or irritation, I couldn't really tell.:P

Meanwhile I almost had a blackout. No exaggeration. The sun was Scorching HOT. My face was an ugly flush of broiled and my vision was getting black. The reason being that everyone had been assigned to either bring water, or caps, or get the gardener to come and hack at the thorn bushes or get a stool to sit ( we didn't know how long we'd have to wait her out), and had I moved into the shade, I'd have lost visual on this small, frisky, super- fast maddo kitten.

That I couldn't afford either.

And as I stood there almost swaying, there was one thought running in my head : Lord please don't let me faint. I can't faint and have the attention off of the kitten.

So another 1.5 hrs later, kitten was rescued by a really sweet security guard and carted back home where she fell into an exhausted sleep. 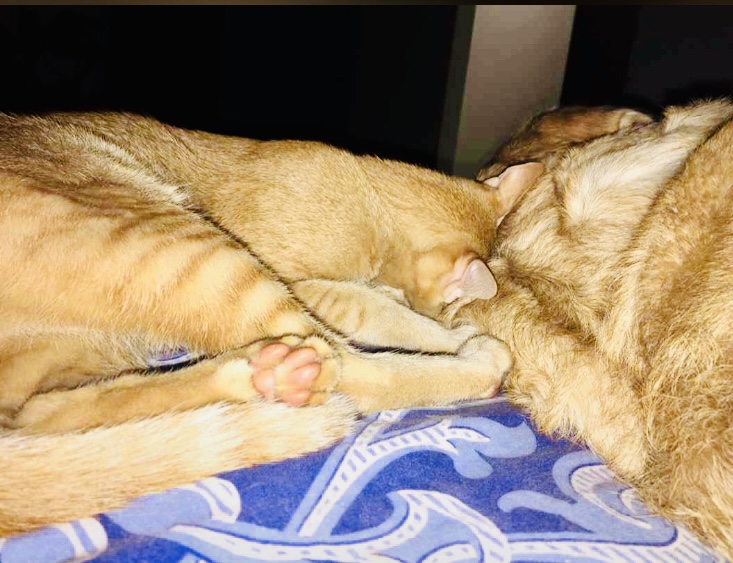 Once the hullabaloo had settled down, and baths had been had and loads of water been drunk, I lay in bed trying to recover from the sun. And I had some distinct realisations.

1) I realised that I told my Actual son, in effect, that it's ok if he got hurt, but the kitten was super important at that point and that I was enough to take care of him, in the aftermath.

And this wasn't a life-threatening situation. It was thorns.

But in effect, that's what God did with Jonah, when he was assigned the Nineveh commission. 'You go through some discomfort or change in plans, but this rescue Has to happen! And I (God) will take care of you.'

And God being God, He went a lot further than that, and sent His son into a literal life and death situation.

The pet. The silly creature that runs from a loving home and comfort, for something that I don't even know. The maddo who's playtime is actually dangerous.

2) I couldn't handle 38 degrees C. In shorts. In health (not the best, but not the worst either).

In a comfortable community. After running after the kitty, in what is a 2 min walk from my gate.

Just standing, sweating, coaxing and waiting her out.

It's a miracle I didn't actually fall sick.

Jesus had been tortured since he stood before the High Priests after his arrest at Gethsemane. This was Midnight.

Since then, there was hauling around while been abused, there were 2 trials back and forth,

there were the 39 lashes by the Roman whip (most people die from this flogging alone),

the walk to Golgotha while carrying His own cross almost all the way, in the hot Israel desert, the Crucifixion, the 6 hours on the cross, and finally death.

See this website for a scientific explanation of Jesus' torture and His trauma on the cross.

This is not a fable, and it's one of the most gruesome stories in History.

But also one of the most needed.

This was no mere miracle.

It was an intentional journey set by a Father who loved like crazy, to change the course of my eternity.

Jesus had to be God!

THE DISCOMFORT OF NEUTRALITY

An international lesson called the BLM movement and why it should matter 13,022 kms away.

A love letter to our daughter before some guy thinks he can write her one.